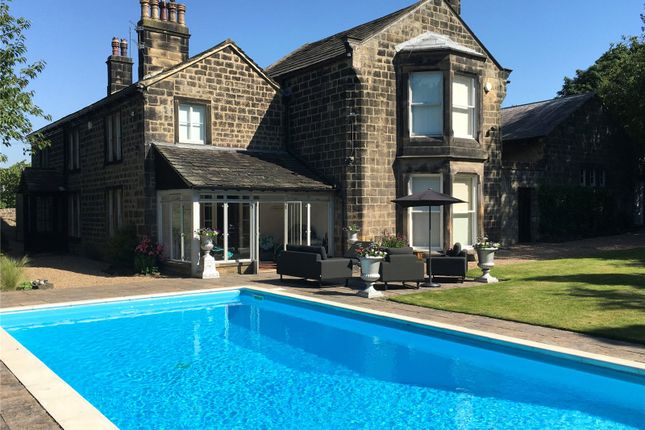 Originally two adjoining cottages dating back to the 1600’s in parts and having been further extended in the 1800’s is this superb and imposing five bedroom detached home which has been sympathetically updated over time by the present owners and sits in mature sprawling grounds extending to approximately an acre and a half with a newly re-surfaced tennis court and re-lined heated 13’ deep swimming pool.Beech Cottage extends to over 5,400 sq ft of flexible accommodation and comprises; entrance hallway with Clive Christian fitted storage unit, guest w/c and generous utility room with a range of fitted Clive Christian wall and base units, two washing machines, tumble dryer, large Belfast sink and Amtico flooring. Leading from the hallway, there is an original metal door dating back to 1667 which gives access to an inner hall which giving access to a useful boot room which has ample storage cupboard space, central heating controls, and a door leading to a private courtyard. There is a useful larder room with fitted shelving and stairs leading down to the Victorian double barrelled-vaulted cellar, an ideal space for wine storage.The superb bespoke Clive Christian kitchen boasts solid oak wall and base level units with granite work surfaces over, a continuation of the Amtico flooring, and a range of integrated appliances including an electric aga, separate Britannia electric oven with gas hob over, American style fridge freezer, dishwasher and double Belfast sink. The kitchen leads through to a secondary beautifully wide entrance hall with feature curved walls and a foundation stone of 1667 depicting the original cottages construction date. There is further built in storage, and an external door leading to the front courtyard.The formal lounge forms part of the Victorian addition and is fully tanked featuring a charming bay window with floor to ceiling glazing overlooking the rear gardens and a magnificent open fireplace with Portland stone surround. There is a further sitting room which has a feature pebble effect gas fire, glazed door leading into a conservatory which overlooks the beautiful formal gardens, tennis court and swimming pool. The formal dining room features the original front entrance door to the house, windows with original restored shutters, a useful cupboard with ample shelving and feature fireplace with brick surround.In addition, there is a generously proportioned reception room which could easily be used as a playroom or further sitting room. There are delightful views over the gardens, an attractive feature fireplace, and access into the library, which would originally have been an Anderson shelter during the war.The staircase has a half landing with stunning feature window allowing light to flood onto the main landing which is a room in itself, and gives access to all the bedrooms. The substantial master bedroom has a bay window overlooking the gardens, a feature fireplace, ample fitted wardrobes and a large en-suite bathroom fitted with a four piece suite including Jacuzzi double bath, separate shower cubicle, his’n’hers sinks and w/c. There are four further generously proportioned double bedrooms, three with built in wardrobe space, with each bedroom having a unique beautiful view. There is a house bathroom and a house shower room that service the four bedrooms, both with ample storage.Outside, the property is fully enclosed with a recently rebuilt walled boundary for security and privacy. An electronically controlled gated driveway providing ample parking for numerous vehicles which in turn leads to three garages with electric up and over doors. A pathway to the side of the garages leads along a walled walkway to an alarmed outbuilding, ideal for use as a workshop, or for stabling; there are stalls already in place. A raised terrace is a delightful location for relaxing in the summer months, and a further Anderson shelter is an ideal place for storing logs.The formal rear gardens are predominantly laid with lawn with a variety of mature trees, shrubs and bushes providing excellent privacy and a generous patio area are both an ideal space to entertain outdoors. There is a full sized tennis court which has been recently resurfaced, as well as a 13ft deep heated swimming pool which was refurbished in 2017 and has an ongoing maintenance contract with a professional pool contractor.In addition, there is a large west facing paddock which features a rotating summer house, a perfect spot to enjoy a gin and tonic in the evening sun and enjoy the magnificent view towards Ilkley Moor.The property is ideally placed for access to the cosmopolitan cities of Leeds and Bradford along with the Leeds Bradford International Airport ideal for the international commuter and the local Apperley Bridge station only 2 minutes drive away. There are a variety of local amenities in the centre of Rawdon which include a selection of shops and good local schools (which cater for all ages and have excellent academic reputations), as well as the renowned private schools of Woodhouse Grove and Bronte House. Micklefield Park and Rawdon Golf and Lawn Tennis Club are both a mere 3 minute walk away. Close to hand are also the smaller villages of Yeadon, Horsforth and Guiseley where there are an array of supermarkets, shops, pubs and restaurants.

Want to sell your property quickly?

Post your ad quickly, your personal data secured with us

Is there something wrong with this ad?

We're constantly working hard to assure that our ads meet high standards and we are very grateful for any kind of feedback from our users.